Can I Use a Tourist Visa to Get Married in the US?

It is legal to enter the U.S. on a tourist visa, travel visa or the Visa Waiver Program (VWP) and get married to a U.S. citizen.  It is also legal to adjust your status after getting married. However, the condition of a tourist visa, travel visa and the VWP is a sworn promise that the person using this visa only plans to visit the United States and not immigrate here.

Intent is what really matters.

The intention of a tourist or travel visa is a temporary visit for a specified amount of time. If you want to get married during your visit then return home before your visa expires that may be legal, but a travel visa should not be used with the intention of entering the United States to marry, stay permanently and adjust status. Using the K-1 Fiancé(e) Visa avoids all of the problems noted above, and is the most appropriate way for a foreign fiancé(e) to come to the U.S. to marry.

"...a travel visa should not be used with the intention of entering the United States to marry, stay permanently and adjust status."

The potential consequences of doing it wrong are serious.

There could be serious problems for someone who enters the United States on another visa with the intention of marrying or residing here. Attempting to obtain a visa or entering the United States by saying one thing when you intend another may be considered immigration fraud, for which there are serious penalties. Those penalties include restricting a person’s ability to obtain immigration benefits, including permanent residence, as well as a possible fine of up to $10,000 and imprisonment of up to 5 years.

The Department of State (DOS) and United States Citizenship and Immigration Services (USCIS) assume that intent to marry a U.S. citizen is the same as intent to immigrate.

Tourism is kind of specific. 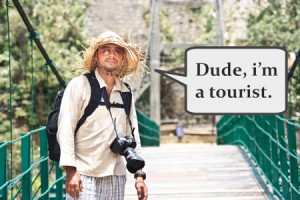 Tourist visas are for people who want to sight see, not get married.

In order for someone to get married in the U.S. while visiting on a tourist or travel visa and then adjust their status to lawful permanent resident they would need to prove they came to the U.S. with the intention to travel to and visit the U.S. and return to their home country but not to get married or immigrate here.

You can easily avoid visa and/or immigration fraud by filing for a K-1 Fiancé(e) Visa or you could get married in the home country of the foreign fiancé(e) and then apply for a CR-1 Spousal Visa. If you have secretly obtained a tourist or travel visa, with the intent to marry your fiancé(e) in the U.S. and to bypass the normal process you should rethink your decision.

Disclaimer: The information in this blog post relating to the legal requirements of the United States and U.S. Department of State is provided for general information only. Questions involving interpretation of specific U.S. laws should be addressed to an attorney and/or government officials.

Make Progress Today
Disclaimer: The contents of this post were accurate to the best of our knowledge at the time of publishing. Immigration is constantly changing, and old information often becomes outdated, including procedures, timelines, prices, and more. Take note of the publish date. For archival purposes, these posts will remain published, even if new information renders them obsolete. Do not make important life decisions based on this content. No part of this post should be considered legal advice, as RapidVisa is not a law firm. This content is provided free of charge for informational purposes only. If anything herein conflicts with an official government website, the official government website shall prevail.

Direct Consular Filing in China – Faster or Better?
Reasons why a person may be ineligible to enter the United States
NVC No Longer Requires Original Civil Documents