Converting to Islam to “Legally” Divorce in the Philippines

The Philippines is the only country other than the Vatican that outlaws divorce. That's why it's no surprise that so many of our customers are surprised to find out that their Filipina fiance cannot qualify for a K1 fiance visa and be with them in the United States due to a previous unresolved marriage. While she may be living completely separated from the first husband for many years, under the eyes of the law, she's still married.

There is one exception that some may think is a viable loophole - "Convert to Islam and be able to legally divorce." Unfortunately for them, it's not that simple. According to Presidential Decree No. 1083, there are divorces allowed in very specific circumstances under Shari'a District Court, subject to the provisions of the Rules of Court. But in terms of obtaining a U.S. visa, bear in mind that it's a U.S. issue, and the consular officer still has the final say.

Most previously married Filipina(o)s find that the only way to be legally free to marry is to secure an annulment. With thousands of dollars, a few years, and a good lawyer, many of them are able to pull it off. However, it is rarely, if ever, a smooth or easy process, and isn't achieved by all who attempt it. 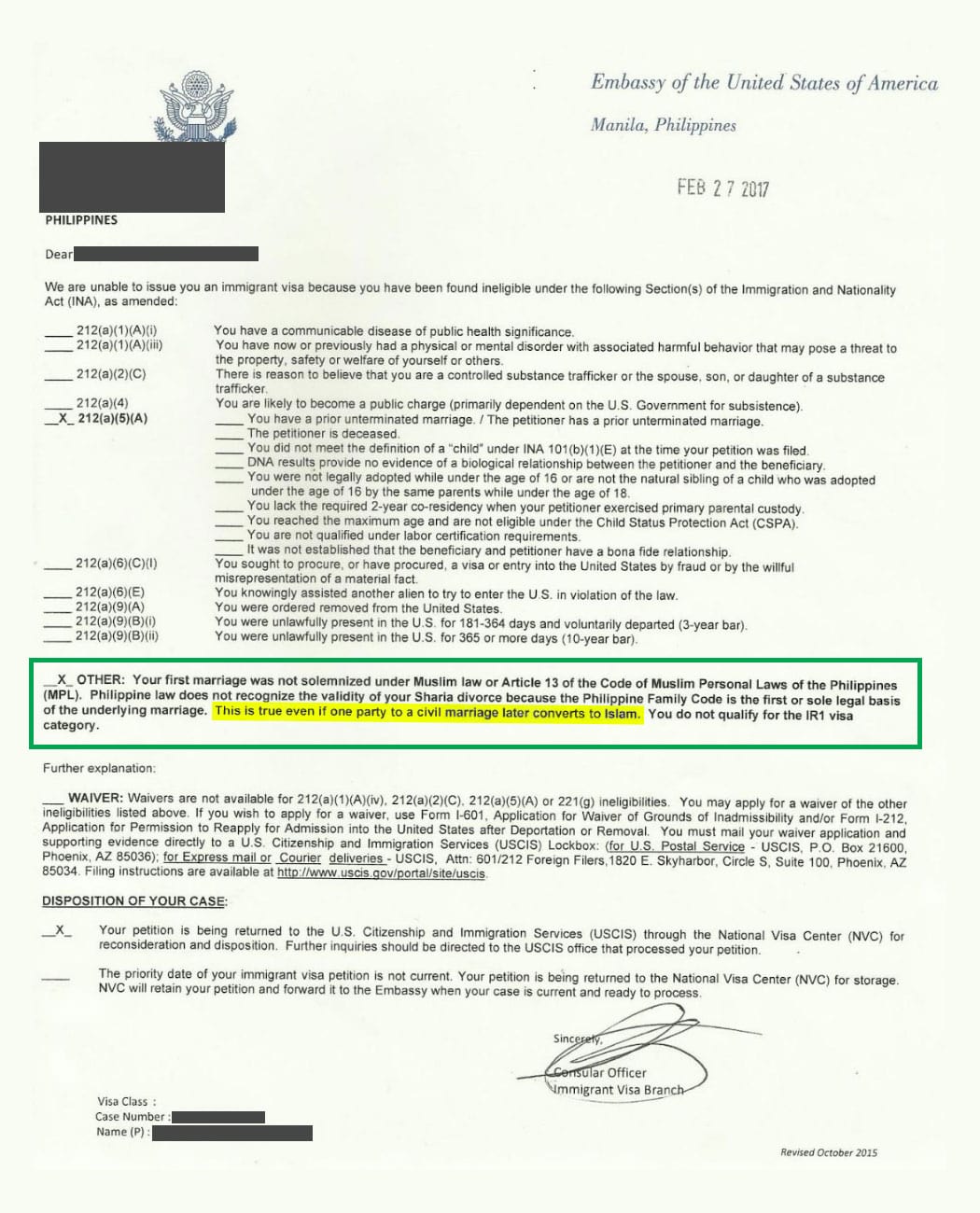 Redacted version of the actual denial letter. Click to enlarge.

In this example, an IR1 spousal visa was denied at the embassy phase for the following given reason:

"Your first marriage was not solemnized under Muslim law or Article 13 of the Code of Muslim Personal Laws of the Philippines (MPL). Philippine law does not recognize the validity of your Sharia divorce because the Philippine Family Code is the first or sole legal basis of the underlying marriage. This is true even if one party to a civil marriage later converts to Islam. You do not qualify for the IR1 visa category."

In this case, the embassy didn't recognize the divorce, because the original marriage was solemnized in the Roman Catholic church, therefore doesn't qualify as a legitimate Islamic divorce under their criteria. 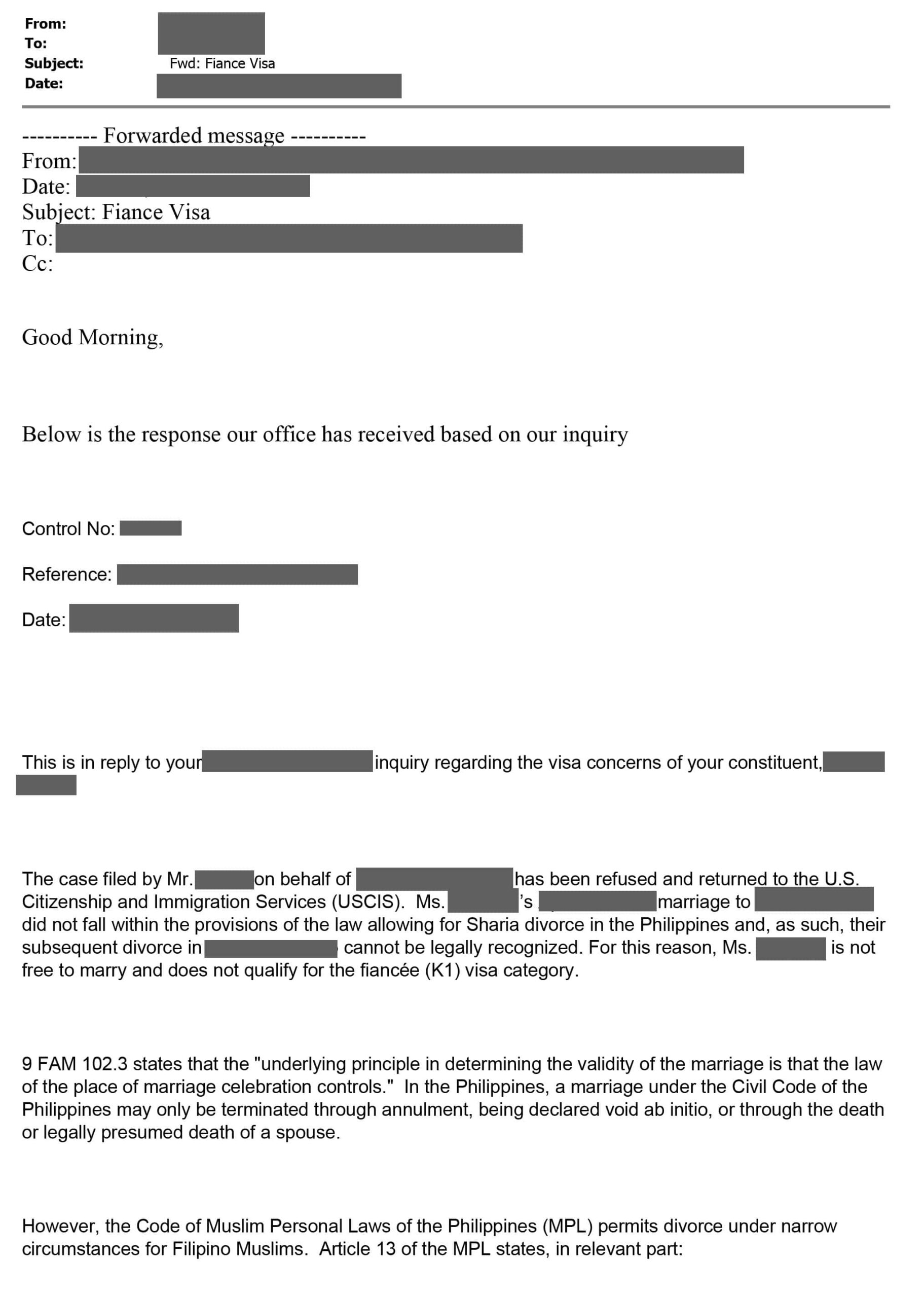 Another of our customers was denied for a K1 fiance visa from the Philippines for the same reason. The U.S. sponsor decided to issue a Congressional Inquiry to find out more about why he was denied. The letter he received was very cut and dry:

"The case filed by Mr. [U.S. Sponsor] on behalf of [Alien] has been refused and returned to the U.S. Citizenship and Immigration Services (USCIS). Ms. [Alien]'s [Date] marriage to [Alien's prior husband] did not fall within the provisions of the law allowing for Sharia divorce in the Philippines and, as such, their subsequent divorce in [Month, Year] cannot be legally recognized. For this reason, Ms. [Alien] is not free to marry and does not qualify for the fiancee (K1) visa category."

The conclusion is that if someone marries under traditional (Catholic) law in the Philippines, and then converts to Islam to attempt to divorce their spouse, they will not be eligible for any fiance or spousal visa.

It is best to not attempt this method, as it's almost certainly a sure way to waste a lot of time and money only to be disappointed and let down in the end.

Can I Expedite My K1 Fiancé Visa if I’m in the Military?
4 Paths to a K-1 Fiance Visa [Infographic]