History of the K-1 Fiancé Visa

“Whence came all these people! They are a mixture of English, Scotch, Irish, French, Dutch, Germans, and Swedes. From this promiscuous breed that race now called Americans has arisen…. Here individuals of all nations are melted into a new race of men, whose labors and posterity will one day cause great changes in the world. Americans are the western pilgrims, who are carrying along with them that great mass of arts, sciences, vigor, and industry which began long since in the east; they will finish the great circle.1” 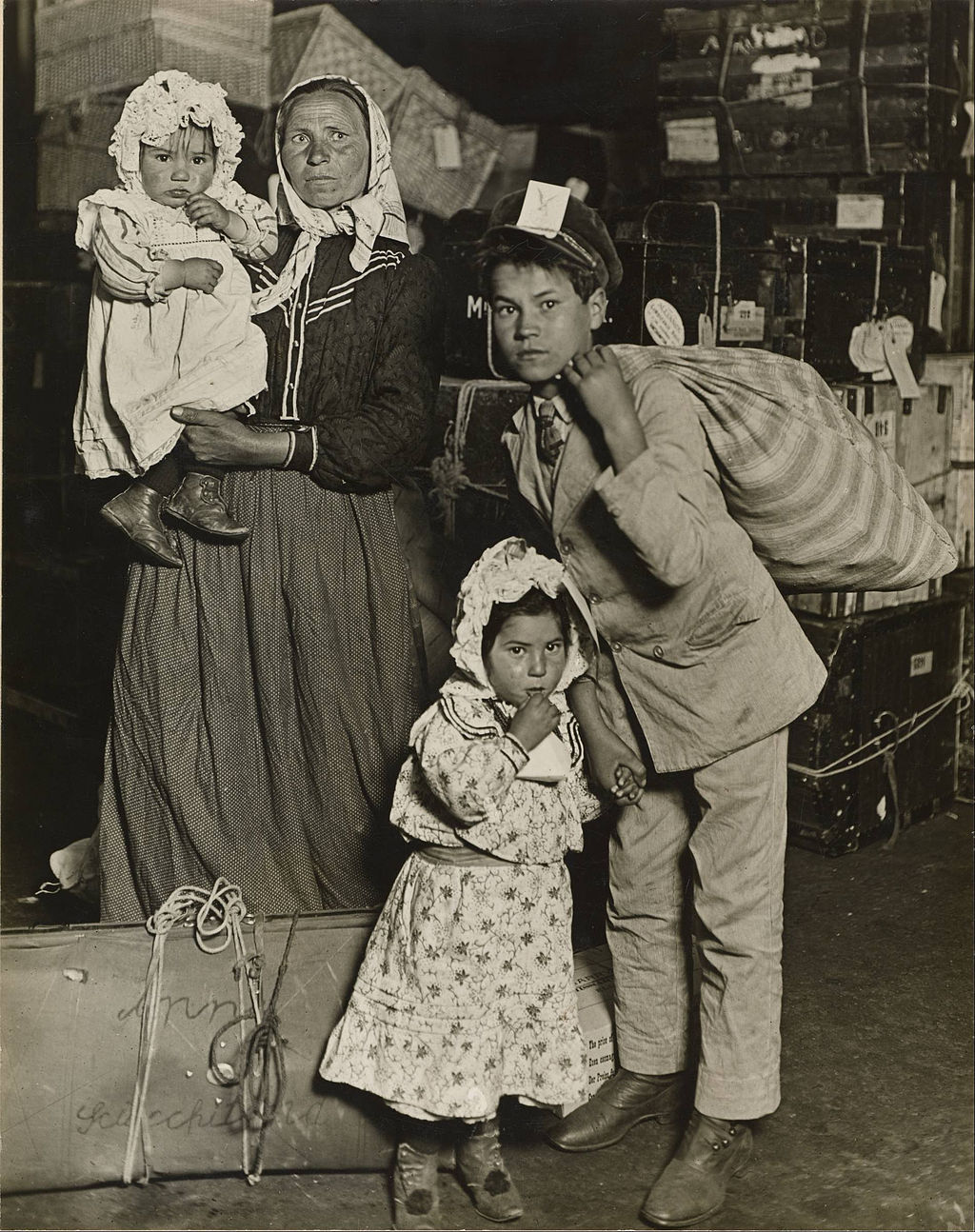 Immigrant Family in the Baggage Room of Ellis Island

In the United States, the topic of immigration has ebbed and flowed with the times. Initially it was not quite as controversial as it is today; in fact, it was rarely a topic of discussion in some periods of American history. However, there are periods in American history when people were worried that certain populations of immigrants would swamp America’s quasi-British culture. In fact, by 1800 many immigrants were deemed too different to be able to adapt to the American way of life. Nevertheless, they did. Despite the hardships immigrants faced in the New World and later the United States of America, they typically held fast to their decision to make a go of it here. Indeed, immigrants have risen to become significant contributors to American society; and over time, some even created cultural legacies such as Mardi Gras, Saint Patrick’s Day, and Cinco de Mayo.

The Evolution of United States Immigration

In all reality, colonial society in America was the result of the cycle of movement of peoples from Britain and Europe for the purpose of settlement in the New World. This cycle of movement, also known as immigration, regularly renewed and expanded. Moreover, due to movement and expansion to northern, southern, and western frontiers in America this immigration intensified after 17602. After the conclusion of the American Revolution (1775-1783), the First United States Congress passed a naturalization act. This act, specifically titled the “1790 Naturalization Act,” established a uniform rule for naturalized citizenship in the United States. In 1795, the Third United States Congress repealed the 1790 Naturalization Act and replaced it with the 1795 Naturalization Act. This new act required the perspective citizen to renounce allegiance to their previous state/sovereignty by name, as well as required the person to reside in the United States for at least five years before submitting a naturalization application.

The Steerage Act of 1819 officially established the documentation of immigrants arriving in the United States; this Act also was the first federal law to distinguish between permanent immigrants and temporary visitors or nonimmigrants. Nevertheless, by early on in the nineteenth century, Americans seldom questioned free and open immigration or policies related to it. However, upon conclusion of the American Civil War (1861-1865) some states started passing their own laws related to immigration, which in-turn, spurred the United States Supreme Court of 1875 to assert that the regulation of immigration was a federal responsibility3. In due course, Congress began the process and eventually passed new immigration legislation primarily because by the 1880’s the number of immigrants had increased rapidly which, in-turn, caused a decline in economic conditions in some areas of the United States. Consequences of the new immigration laws prevented specific laborers from entering the United States as well as spawned the need for federal enforcement authorities4. After the passing of the Immigration Act of 1891, the federal government took command of processing all peoples looking for admittance into the United States of America.

In the early decades of the twentieth century, immigration policies evolved. During this same period, partly due to World War I, the country again endured increased levels of immigration that resulted in admitting nearly 15 million people over the course of twenty years5. Concerned with how continued mass migration would affect the country, Americas open attitude with respect to immigration began to wane. Congress acknowledged American citizens concerns and responded with the Immigration Acts of 1917, 1921, and 1924 respectfully. The Immigration Act of 1917 integrated and summarized earlier immigration laws. The 1917 Act also, for the first time, addressed plans connected to nonimmigrant visas that were included in subsequent laws. The 1921 Act temporarily established the “national origins system” which limited the number of immigrants allowed into the country via the nation from which they originated6. The 1924 Act created a permanent quota system for immigration; and importantly this Act also defined the difference between an immigrant and a nonimmigrant and established the A (Foreign Government Official), B (Temporary Visitors), C & D (Aliens in Transit and Crewmembers), E (Traders, Professionals, and Investors), and F (Student) nonimmigrant visa categories. In short, for the first time in the United States history, the number of immigrants allowed to enter the country was limited by way of nation of origin. Furthermore, only immigrants who obtained official documentation or a Visa, from American Embassies established abroad could enter the country. 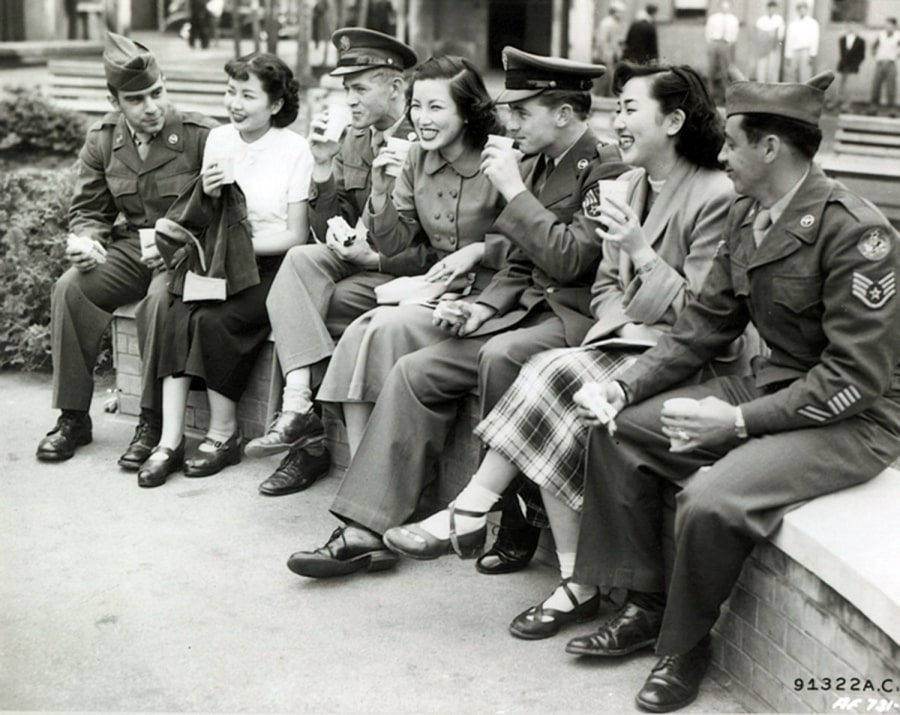 Thousands of American soldiers returned from WWII with Japanese wives who eventually assimilated into American culture.

Through the years of the Great Depression (c.a. 1929 – c.a.1939) legal immigration significantly decreased. Then, with the threat of the Second World War looming, the United States view on immigration evolved from economic concerns to that of security concerns. Upon the initial conclusion of World War II, immigration to the United States hovered in the low numbers due to the Acts passed by Congress in the 1920’s. Notwithstanding, the war had created a humanitarian crisis, which in turn brought about new challenges for United States Immigration.
To tackle the crisis in post war Europe, Congress passed the Displaced Persons Act of 1948 and the Immigration and Nationality Act of 1952. The 1952 Act removed some (but not all) barriers in immigration laws. The 1952 Act also established the H (Temporary Worker) and I (Foreign Media Representatives) nonimmigrant visa categories. In 1953, Congress passed the Refugee Relief Act. These Acts provided a way for war refugees to legally enter the United States. In addition, the War Brides Act of 1945 and the Fiancées Act of 1946 provided a path for American military personnel, returning to the United States from tours of duty, to bring their foreign spouse or fiancé with them. The 1945 Act also added the G (Foreign Government Officials) nonimmigrant visa category. Once the Cold War against communism commenced then progressed into the 1960’s, the increased exodus of refugees fleeing communist countries launched the generation of new immigration policies.

In 1961 the Mutual Educational and Cultural Exchange Act was passed which further committed the United States to international exchange programs; this act also created the J-1 (Exchange Visitor) and F-2 (Student) nonimmigrant visa categories. In 1965, Congress amended the Immigration and Nationality Act of 1952. This amendment was in response to changes in the origination of visa requests… the majority of applications for visas had shifted from Europe to Asia, Central America, and South America7. The amendment also created a mechanism for reuniting immigrant families who, due to war, were separated. Furthermore, it encouraged peoples with specific skills to come to the United States.

From the mid 1960’s to mid 1970’s, due to the build up and entry into the Vietnam War, millions of United States military personnel and civilian employees deployed or rotated in and out of Asia, especially South Vietnam. Because they remained in the country up to a year or more, military, and civilian personnel sometimes developed relationships with locals that lead to engagement or marriage. However, unfortunately for military personnel this situation first, lead to a time-consuming process of acquiring permission from the military to marry an Asian, then second, lead to a long, complicated formal process of obtaining an American visa for the Asian spouse. A fact that further complicated the situation was, if a couple chose to get married in the United States, the “Fiancée” was considered an “intending immigrant” and thus was not eligible for a visitor’s visa; another convoluted situation was the fact that there was no specific visa category that applied to foreign fiancées of American citizens8.

The K-1 Visa and the Marriage-based Immigration Process

By the late 1960’s, the United States had ten nonimmigrant visa categories however, none of the categories applied to foreign fiancées of American Citizens. The United States response to this situation was Public Law 91-225. The passing of this law on April 7, 1970, opened the door for the temporary admittance into the United States of foreign fiancées of American citizens. Unlike the War Brides Act of 1945 and the Fiancées Act of 1946 the K-1 Visa was/is not limited to fiancées of Military personnel. Furthermore, as long as the fiancé achieves or passes all of the requirements stipulated in the K-1 process, they will receive the K-1 visa.

Notwithstanding, there are steps and eligibility requirements for  acquiring the K-1 Visa. The first step requires the American citizen petitioner to file the proper petition form (Form I-129F) with the United States Citizenship and Immigration Services office that serves the area where the petitioner lives. Second, the perspective fiancé must prepare for an interview at the U.S. Embassy or Consulate where they live. Preparation for the interview includes completing the Online Nonimmigrant Visa Application (Form DS-160). Once the application is completed and reviewed, the visa interview date will be set. The foreign fiancé must then acquire a valid passport for travel to the United States. The fiancé must also provide a divorce or death certificate (if appropriate); request a police certificate from the country of residence; get a medical examination; provide evidence of financial support (Form I-134); supply two 2x2 photos; provide evidence of the relationship with the U.S. citizen; and finally, pay all required fees.

1. Michel-Guillaume-Saint-Jean de Crevecoeur (Born on January 31, 1735; died on November 12, 1813), known in America as J. Hector St. John was a French American author whose work provided a look into life in the New World. Information retrieved from encyclopedia Britannica website, https://www.britannica.com/biography/Michel-Guillaume-Saint-Jean-de-Crevecoeur#ref5024.

2. Bernard Bailyn, Voyagers to the West: A Passage in the Peopling of America on the Eve of the Revolution (New York: Random House, 1988), 8.