The Border Wall, referred to as “the wall” is a proposed expansion of the Mexico-United States barrier proposed by Donald Trump for his presidency. Trump campaigned on calls for the construction of an expensive, much longer and more substantial barrier claiming that if he was elected he would “build the wall and make Mexico pay for it”. President Nieto of Mexico responded at the time that Mexico would not pay for the wall. 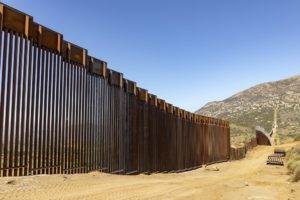 In February 2018, Trump declared a national emergency over the situation at the US southern border, which has seen a rise in the number of migrants entering the country due to violence in South America. This emergency order allowed Mr. Trump to divert money from other projects to fund his long-promised project. Normally, only congress has the power to appropriate funds for any expenditure of the US Government. However in an emergency the President, while still not allowed to direct new spending, is able to shift already-appropriated funds from one project to a different project. For example, the president could take money about to be spent on a new bridge or money funding government programs away to instead be spent on building his wall.

According to expert analysis, the cost to construct a wall along the 1,300 miles of remaining border could be as high as $20 million per mile, with a total cost of up to $45 billion, not including the cost of purchasing land from private owners. Maintenance of this wall would be up to $750 million per year.

Before Trump took office, there were 654 miles (just over 1,000 km) of barrier along the southern border - 354 miles of which can stop a pedestrian and 300 miles of barrier that instead is not passable with a vehicle. In the run-up to his electoral win, Mr. Trump promised to build a wall along the border’s entire 2,000 mile length. He later changed his promise to only covering half of that - with mountains and rivers taking care of the rest.

Since Mr Trump entered the White House, although some of the already existing barriers have been replaced, work on extending the current barrier only began two years into his presidency. Overall, $9.8 billion has been secured since January 2017 to construct approximately 509 miles of "new border wall system", according to US Customs and Border Protection. By December 2019, only 93 miles of new wall has been built.

Mexico is not paying for the wall.