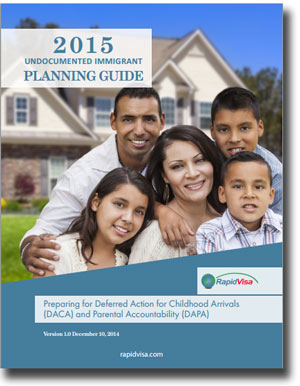 Get our free ebook here!

On November 20, 2014, President Barack Obama made an announcement regarding deferred action for certain undocumented parents of U.S. citizens and parents of lawful permanent residents (LPRs). In this announcement, President Barack Obama stated that the U.S. Department of Homeland Security (DHS) would not deport these parents if they met certain criteria and were qualified under the new program. The president also announced an expansion of the Deferred Action for Childhood Arrivals (DACA). This program was created in 2012 for youth who came to the United States as children. Under a directive from the secretary of DHS, these parents and youth may be allowed reside and work in the U.S. on a temporary basis. These programs will not take affect until some time in 2015 but they are expected to help up to 4.4 million people, according to the Department of Homeland Security.

U.S. Citizenship and Immigration Services (USCIS) will provide more information regarding these programs in the coming months. Currently, they are not accepting applications for the expanded DACA program for youth or the Deferred Action for Parental Accountability (DAPA) program. However, USCIS continues to accept initial applications and renewal applications from people who qualify under the current criteria, for DACA, announced in June 2012.

Get More Info on DACA & DAPA