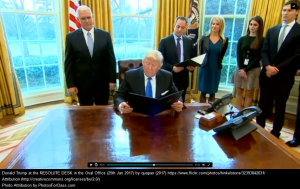 This post is regarding President Trump’s January 27, 2017 Executive Order: "Protecting the Nation from Foreign Terrorist Entry in the United States"

Foreign nationals from Iraq, Yemen, Libya, Sudan, Somalia, Syria, and Iran who do not have lawful permanent resident status are banned from entering the United States.

Why It Was Implemented

The White House contends that the travel ban was initiated to increase national security and promote the safety of American citizens. Legal opponents to the travel ban refute this by declaring that the executive order is a ban against Muslims, which violates the 1st Amendment of the US Constitution.

Is the Executive Order a Travel Ban?

Yes. Affected individuals from those seven nations are not allowed to travel to the US for that stipulated 90 day period.

Is the executive order a “Muslim ban?”

This question is central to a federal judge’s recent suspension of the travel ban. The White House states that the travel ban is not specifically targeted towards Muslims. Numerous state Attorneys General have challenged this claim by noting that President Trump has previously stated that extreme measures were needed to keep Muslims out of the United States. The question of the order’s intent will therefore determine whether or not the travel ban will resume.

President Donald Trump issues an executive order temporarily banning citizens from Iraq, Yemen, Libya, Sudan, Somalia, Syria, and Iran. The ban will extend for 90 days and also halts refugee resettlement programs to the US for 120 days.

Following nationwide confusion as to how various government agencies are to implement the ban – and the “provisional revocation” of approximately 60,000 travel visas - the White House stated that the immigration decree does not apply to foreign citizens that already possess legal permanent residency in the United States.

The Attorney General of Washington state –followed shortly by Minnesota and eventually fourteen other states – files suit against the executive order. The request that the travel ban be suspended is followed by dozens of other lawsuits from a variety of national agencies. A limited number of courts start temporarily suspending various parts of President Trump’s executive order.

A US District Judge responds to the Attorneys General suit, temporality suspending enforcement of the executive order. The federal judge ordering the suspension states that further judicial evaluation is necessary. Responding to the judge’s order, the government informs the airlines that travelers from the seven banned nations are once again allowed entry to the United States. The State Department summarily reverses cancellation of the 60,000 travel visas halted by the initial executive order.

The Department of Justice files against the suspension of the travel ban, stating that it will appeal the federal judge’s order.

The federal court denies the Department of Justice request, citing the need for further judicial review.

The federal court decrees that documentary filings from all concerned parties is due by the end of the work day.

Testimony from both sides is scheduled at the 9th US Circuit Court of Appeals in San Francisco. Oral arguments from the Justice Department and the involved state Attorneys General will be heard at 3 PM.

A new version of the ban is introduced, which includes a slightly different list of countries from the original. Now, Iran, Syria, Libya, Yemen, Somalia, Chad, North Korea and Veneuela are affected.

RapidVisa is notified of its first customer who fell victim to the travel ban. The customer was a national of Iran living abroad in the UK, applying for a CR1 Spousal Visa. The customer applied months before, and was approved through the USCIS, but refused an interview by the US Embassy by grounds of Executive Order 13769.

President Trump added Nigeria, Myanmar, Eritrea, Kyrgyzstan, Sudan and Tanzania to the banned list. For more details, see this article. More to come as we get information.

Foreign nationals from the seven targeted nations already in the United States are advised not to leave the country until the legalities on the matter are concluded. Foreign citizens abroad who might be affected by the resumption of the travel ban are advised to return to the US as soon as possible.

We will continue to update this page as developments continue.

Case Returned to USCIS – What Now?
A list of countries where U.S. residents — both citizens and legal permanent residents — can travel to during the pandemic